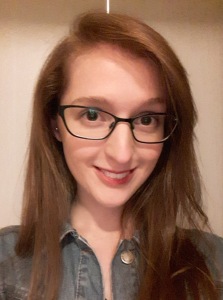 My name is Charlotte Blackburn; I am a Zoology graduate currently studying at the University of Edinburgh for an MSc in Science Communication and Public Engagement … yes, that is something of a mouthful! I recently had the opportunity to participate in the droso4schools science communication project of the Manchester Fly Facility, and would like to explain here how this came about, the experiences I made, and how this aligned with my training in science communication.

I’ve been enthusiastically involved in “scicomm” (as it is known to those in the trade) since my second year of university. I have always found engaging the public with science to be incredibly rewarding, and I chose to apply for the Edinburgh course as I wished to explore this emerging field in more detail. Thus far, I have studied topics such as the relationship between modern science and society, the ins and outs of science-based policy making, and the effects of the media on the public’s perception of science. Interestingly, much of what is discussed concerns getting scientists interested in science engagement, rather than the public, as one might assume. In agreement with this notion, also a recent special issue on science communication in the biomedical sciences emphasises that the low degree of participation of researchers in scicomm is an important issue that needs to be addressed. On the one hand, there might be a lack of understanding of scicomm, but often there simply isn’t a large enough incentive for scientists to get involved, and clearly there is lack of time. Life in academia, with its many different tasks in research, teaching, administration, grant writing, dissemination and industry collaboration, is very busy; it is therefore unsurprising that many seem to view science communication as just another job to throw on their ever-teetering pile.

It is my current ambition to achieve a doctorate, and I would ideally like to be able to combine a career in research with my passion for science communication. However, practical experience is something many graduates struggle to gain once they have left the relative comfort of full-time education. Funded internships and research assistant posts are few and far between, and are not always relevant to one’s interests. So I decided to take a proactive approach and sent a few short emails to neuroscientists at the University of Manchester, enquiring about potential voluntary placements. An unusual request, but one that I am glad I made. Soon after, I received a positive response from Professor Andreas Prokop. Although we could not arrange for a longer-term science project for formal reasons, there was an opportunity to take an active part in the science communication initiatives of the Manchester Fly Facility instead – would I be interested? Of course! I jumped at the chance, and I was offered a one months’ work experience placement, supervised by Andreas and the fly facility manager Sanjai Patel.

The Manchester Fly Facility hosts fourteen research groups, each exploring a different area of biology using, as their research tool and strategy, the model organism Drosophila melanogaster (commonly known as the fruit or vinegar fly). I have to confess, before I began my placement at the Facility, I hadn’t had any significant experience with invertebrate biology, let alone Drosophila – and I was only aware of its use as a model organism in the field of connectomics. Up to that point, I had been much more interested in discussing research involving rodents, or non-human primates. However, by the end of my placement, I could be found happily listing the merits of fruit fly research with anyone who would stand around long enough to listen. What then occurred in this short space of time, to turn a normally vertebrate-oriented biologist into such an enthusiastic cheerleader for an insect? Well, I learned a lot about the power and enormous range of applications of fly research. It turns out that the “simple” fly is actually wonderfully complex – for example, flies can memorise and learn – capabilities I would have thought to be exclusive to higher vertebrates. They can also get drunk, aggressive, and jet lagged … and were the first organisms ever to return safely from a trip to space! And, this year marked the seventh Nobel Prize in Physiology or Medicine awarded for research in fruit flies!

It was a pleasant surprise to find that the researchers at the Manchester Fly Facility are passionate advocators of fruit fly research. As explained in a recent paper, they have developed a comprehensive science communication initiative which not only addresses the public and other non-drosophilist researchers or clinicians, but also recognises the need to communicate with and inspire their own select research community – since the need and importance of science communication and Drosophila advocacy appears not to be recognised by many scientists (as already discussed above).

At the Manchester Fly Facility, however, there is a team of scientists who actively make time. They do so, because they believe firmly and passionately in the importance and benefits of engagement, for both the general public, formal education, and the wider scientific community, and this is clearly spelled out in their “Vision, Mission, Purpose” statement, as well as in a recent PLoS blog.

As part of their work with the public, the Fly Facility also initiated the droso4schools project which aims to introduce Drosophila as a teaching tool in the biology lessons of schools and colleges. Within this project they developed an excellent, regularly reviewed program of biology lessons for schools and colleges, offering a plethora of free, high quality online resources for teachers, as has been explained in a recent publication.

The school biology lessons they generated are the result of long-term collaborative efforts of research staff and placement students together with engaged teachers at partner schools; they link fundamental biology teaching to both past and current fly-based research, and directly address numerous key learning requirements from the national curriculum, often with an end-of-year revision session in mind. There is even a lesson on statistics! Notably, the lesson resources with teacher support materials can be downloaded separately and are being used not only in the UK, but worldwide (see their impact document).

And it doesn’t stop there. The team have also put together a set of complementary resources to be used by other scientists on extra-curricular school visits and science fairs, and they engage in school visits themselves and offer CPD sessions hosted at the university, for teachers interested in using flies as regular hands-on teaching tools in the classroom (see their impressive list of visits and events).

The work Andreas and Sanjai had in mind for me, was lab-based, aiming to develop and document fly experiments for their active outreach programme. When I discovered this at our initial meeting, I became even more enthusiastic – what a great opportunity to combine my interests! My placement allowed me to gain insight into the working behind this initiative which, to my great surprise, is driven in its core by only two people, Sanjai and Andreas. 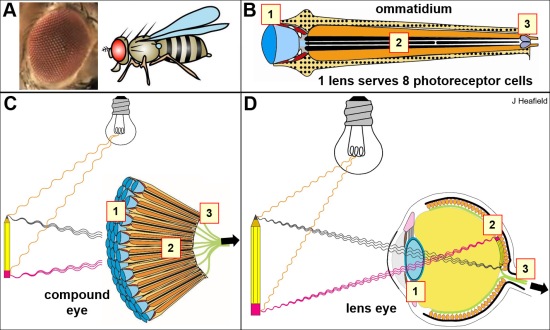 (A) Compound eye of Drosophila. (B) Ommatidium, a single visual unit of the compound eye: 1, lens; 2, photoreceptive cells; 3, exiting nerve leading to the brain. A diagrammatic view of a compound eye (C) compared to a human eye (D); although the eye anatomy is different, the steps in detecting light are the same. For more info, see the vision resource.

My task was to work out and document experiments for an almost completed lesson concerning the science of vision (see the online resource). Drosophila, with their compound eyes, are capable of seeing different wavelengths of light, similar to what 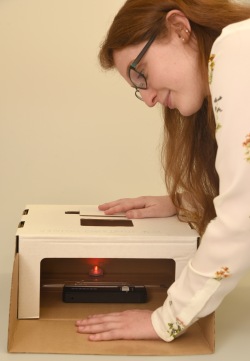 we would describe as colour vision in humans. Part of my task was to develop a method of demonstrating this in the form of a hands-on and/or virtual micro experiment for use in classrooms. Initially, I was a little daunted, but I soon settled into the familiar trial-and-error routine of scientific problem-solving. I received training in specialist fly handling techniques, and fantastic support from Sanjai, who was a great help when it came to formulating feasible ideas. It wasn’t too long before I developed an experimental set-up that would allow me to show colour vision and colour-blindness in flies; exploiting the fly’s positive phototaxis behaviour (a natural attraction toward light sources, as is explained on the resource’s web page), I devised an experimental set-up with a series of coloured and UV lights, using materials sourced from my father’s company, which specialises in UV-based hand hygiene training.

After a few sessions of fine-tuning, I began the filming process, aiming to show-case the experiment on YouTube to help teachers set it up, and to complement the web resource. The video footage can also be used in classrooms where teachers do not have the time or capacity to set it up as a hands-on practical. With the fantastic support (and patience) of Nick Ogden and his team at the School of Biology’s Photographics Unit, it took only a few sessions over a number of days to collect some excellent footage of vision-based fly behaviours in action. The art of video editing also took a bit of getting used to at first, but the final cut is something I’m quite proud of.

Apart from having gained an insight into the biology of a truly remarkable organism (which once I would have swatted away without so much as a second thought), this placement has been a fantastic learning experience. I’ve had a chance to synthesise and exercise my theoretical knowledge in practice, and gain hands-on experience in the busy world of academic science communication.

I’ve been able to engage in lively discussions regarding scicomm strategies with my supervisors, and with other researchers at the facility. Yes, scientists are busy, but with a clear, overarching objective, scicomm participation can be woven into even the most hectic of scientific lives. Scicomm strategies don’t just materialise overnight (nor do they need to) – the most successful are formed from a careful step-by-step process of pooling, developing, and evaluating ideas over the long-term.

I have learned some of the ways in which information I’ve generated can be communicated, in order to maximise impact, and capitalise on time invested. For example, the practical experiment I devised could not only be used in school lessons, but also at science clubs, and as a demonstration at science fairs. Furthermore, the video has been posted on YouTube, and can now be shared via other social media platforms. I’ve also been involved in some exciting discussions regarding the potential development of a large-scale engagement initiative, one which could reach thousands of pupils, far more than could ever be reached through scattered school visits. The CusMiBio Project (University of Milan, Italy) has shown how a simple school outreach programme can be cultivated, over time, into a truly remarkable collaborative enterprise. Using this initiative as a blueprint for their own, the Manchester Fly Facility team could help to put Manchester on the map as a national frontrunner in science education outreach. This would not only be a fabulous asset to the university, but also for the schools involved.

The Manchester Fly Facility team are an inspiring example of science professionals who understand that science communication and engagement should be, and indeed is, a mutually beneficial experience. It is often said that enthusiasm can be contagious, and I for one can only hope that this team’s enthusiasm for science engagement continues to spread a buzz throughout the academic community.

A blog of the National Institute of Neurological Disorders and Stroke

Fly on the Wall

Making fly science approachable for everyone

European Scientists promoting the importance of cytoskeleton in brain research